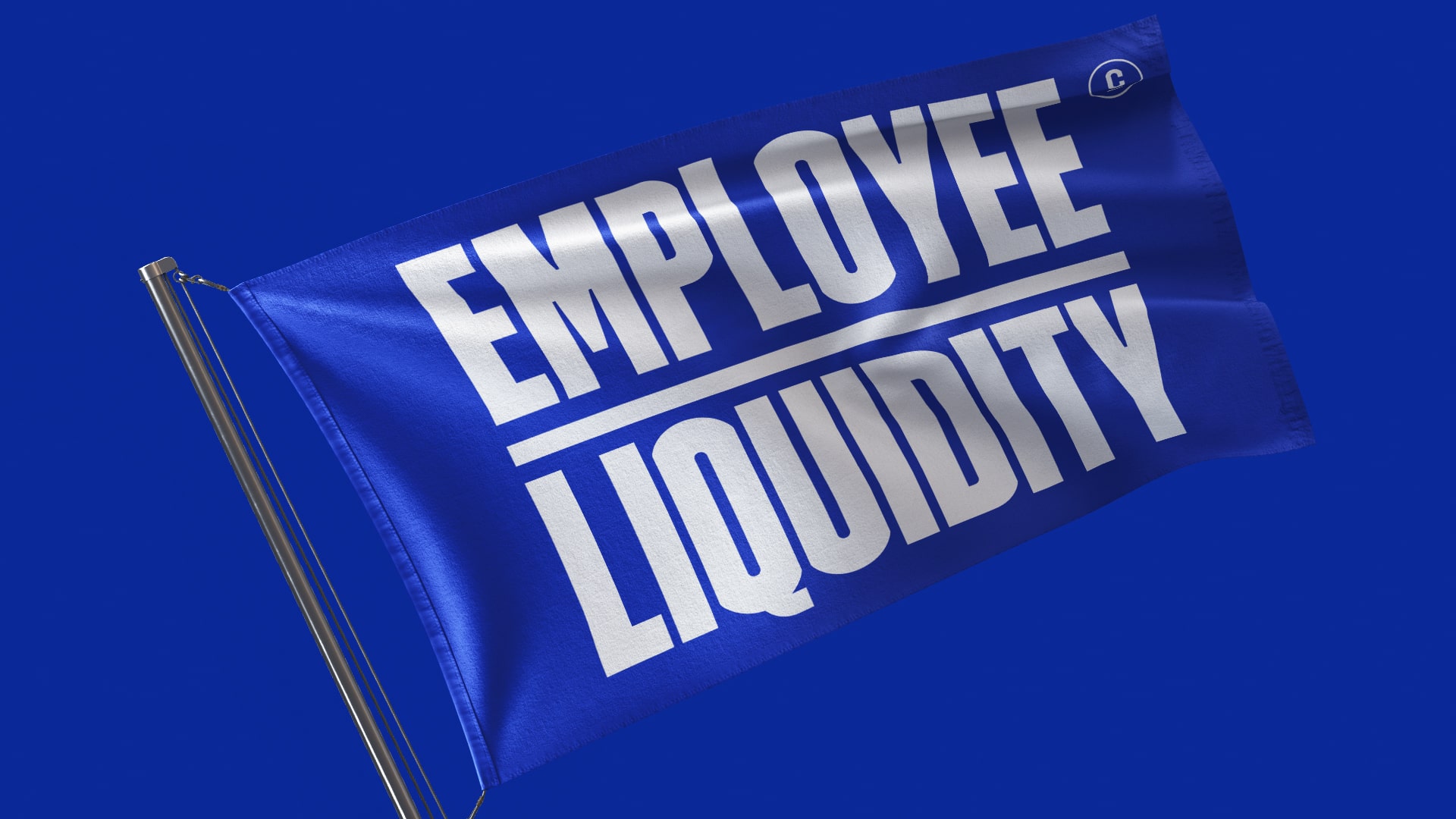 Employee liquidity: the most important trend in equity

When it comes to liquidity in private companies, there’s a clear disconnect between employee expectations, startup rhetoric and the reality of the market. The IPO narrative reigns supreme among visionary CEOs and Founders, but when Capdesk surveyed 1000 employees, just 13% told us they believed an IPO was their best chance of converting their equity into cash. With the majority of startups meeting an alternative fate – be that acquisition, merger or failure – employees are right to be cynical.

These insights hint at bigger issues than simply the odds of being acquired. If 87% of employees aren’t betting on an IPO, what value do they place on getting equity at work? What can businesses do to convert employee equity from a shot in the dark to a tangible benefit?

To discuss these topics and more, we sought the opinion of three equity experts. Christian Nentwich, CEO and Co-Founder of Duco, Ed Franklin, Associate and Financial Controller at Pett Franklin, and Christian Gabriel, CEO and Co-Founder of Capdesk, joined us for a recent webinar to discuss the employee liquidity trend. From here on, we’ll abbreviate Christian Gabriel to CG to avoid confusion.

The rise of employee liquidity

Our panellists began by explaining why employee equity matters today. Christian recognised that while employee equity is an under-developed resource in Europe, it’s key to business growth. “It’s an important tool for building a high-growth company when you can’t pay market rates in the early stages.”

CG agreed: equity is important because of its relationship to attracting and retaining talent. “In Europe, we’re seeing an equity revolution. When I started Capdesk seven years ago in Denmark, it was very hard to persuade talent to join us. Today, more people are willing to join early-stage ventures and take a chance on their equity cashing out.”

For Ed, employee equity is important because of today’s lengthier paths to IPO. “We’re seeing increasing investment in private companies which could take ten years to IPO. There is a lot of venture capital and private money waiting to be deployed.”

Moderator Stina Kärkkäinen, Capdesk’s Entrepreneur-in-Residence, asked the panel who should take responsibility for employee liquidity in a startup. Christian answered that it ought to be the CEO, but noted attitudes towards employee liquidity vary considerably among CEOs.

“Some CEOs do private round after private round, taking millions off the table while their employees’ options lapse. That kind of behaviour fuels the perception that options aren’t worth anything.”

Christian then raised a question that recurred throughout the debate: are employees with a path to liquidity more motivated by their equity than those without one? He drew on a recent example from his own business, Duco. “We recently organised a liquidity event for our entire option pool. I had no idea how much people’s attitudes towards options would change once they were worth something.”

“Options work well for three or four years. After that, optionholders start to worry about whether they’re ever going to be worth anything. When you get close to the ten-year lapse limit, people really start panicking.”

The panel then touched on the obstacles preventing startups from leveraging employee equity. CG suggested that the way CEOs and those in the boardroom viewed and utilised equity was often a blocker itself.

“Too many boards look to spreadsheets for answers about employee happiness and motivation. Boardrooms lacking in operational experience hit on equity as a formulaic solution to employee turnover. But it’s very mechanical. They’re not really asking how they can make it beneficial for employees.”

Christian held up the EMI scheme as an example of how obstacles to realising liquidity events are often baked into a company’s structure. “With EMI options, unless you’ve written the ability to partially exercise into the option upfront, it’s an alteration to the option terms to offer such an exit and you’re invalidating the option. To avoid that, you need to consider things like partial exercises even when you’re a tiny, ten-person business.”

Ed also believed EMI rules could be awkward for businesses. “On one hand, EMI legislation has stood the test of time. But on the other, it’s quite restrictive and there are disqualifying events that mean you’re forced into non-EMI treatment, which is a lot less favourable. There’s always anxiety over EMI status.” He also explained that concerns over whether equity is classified as a readily convertible asset, as well as the tax discounts bestowed upon private companies by HMRC, heavily influence decision-making.

The business case for secondaries

Moving from outlining the problems to suggesting solutions, CG spoke about the importance of transparency. “We need to move towards transparent equity transactions. If a founder cashes out, that should be communicated to the company. Right now, you can be employed by a business for as long as the founder and have no idea if there’s been any liquidity.”

Debates over employee liquidity are regularly framed by references to fairness. Some argue it’s only fair that employees are rewarded for taking a lower-salary role at an early-stage startup, and companies should work to create liquidity events for all. Christian, however, disputed this approach.

“I don’t believe fairness is a strong argument because it’s not relevant to investors. If I’ve already invested £10 million in a company and I’m asked to write another cheque for another £3 million to enable liquidity, I’ve got no compelling reason to say yes.”

Instead, a business case should be made for the new investment. “If you explain that you have five awesome employees who built all your IP, that they’ve been at it for five years and that this additional investment means they’re going to stay another five years, that starts to look like a great answer for an investor.”

“One of the key challenges for business leaders today is employee attrition and staying competitive in the labour market. If you go to an investor with a plan for retaining your amazing talent by doing a £1 million secondary round every year, it becomes something investors want to look at.”

A maturing market for employee liquidity

Finally, our panellists discussed how the lack of experience European startups have with employee liquidity affects the way equity is used. CG referenced his earlier example of boards that see equity as a formulaic solution to employee retention, and explained that a lack of understanding can turn equity into an afterthought.

“Currently, European startups and their employees don’t have enough data or advisors to fully grasp how equity works. In a lot of cases, companies issue equity by default and it ends up little more than a gimmick. When that happens, the leadership team needs to reclaim ownership of the option pool and put a clear plan in place.

CG believes that the way startups, CEOs and employees perceive equity is changing and that those changes are already noticeable. “It’s the new dinner party conversation – you hear about someone who has a friend who got rich off of their options. It’s not out there on the news just yet, but it’s happening. Options FOMO is gaining traction in the tech industry and it’s bringing better, brighter talent to the workforce.”

Previous story
The missing puzzle piece: how Capdesk complements the work of your advisors
Next story
Capdesk product news – October 2021

From dawn to dusk: the journey of an employee option

A snapshot of equity in Germany's startups