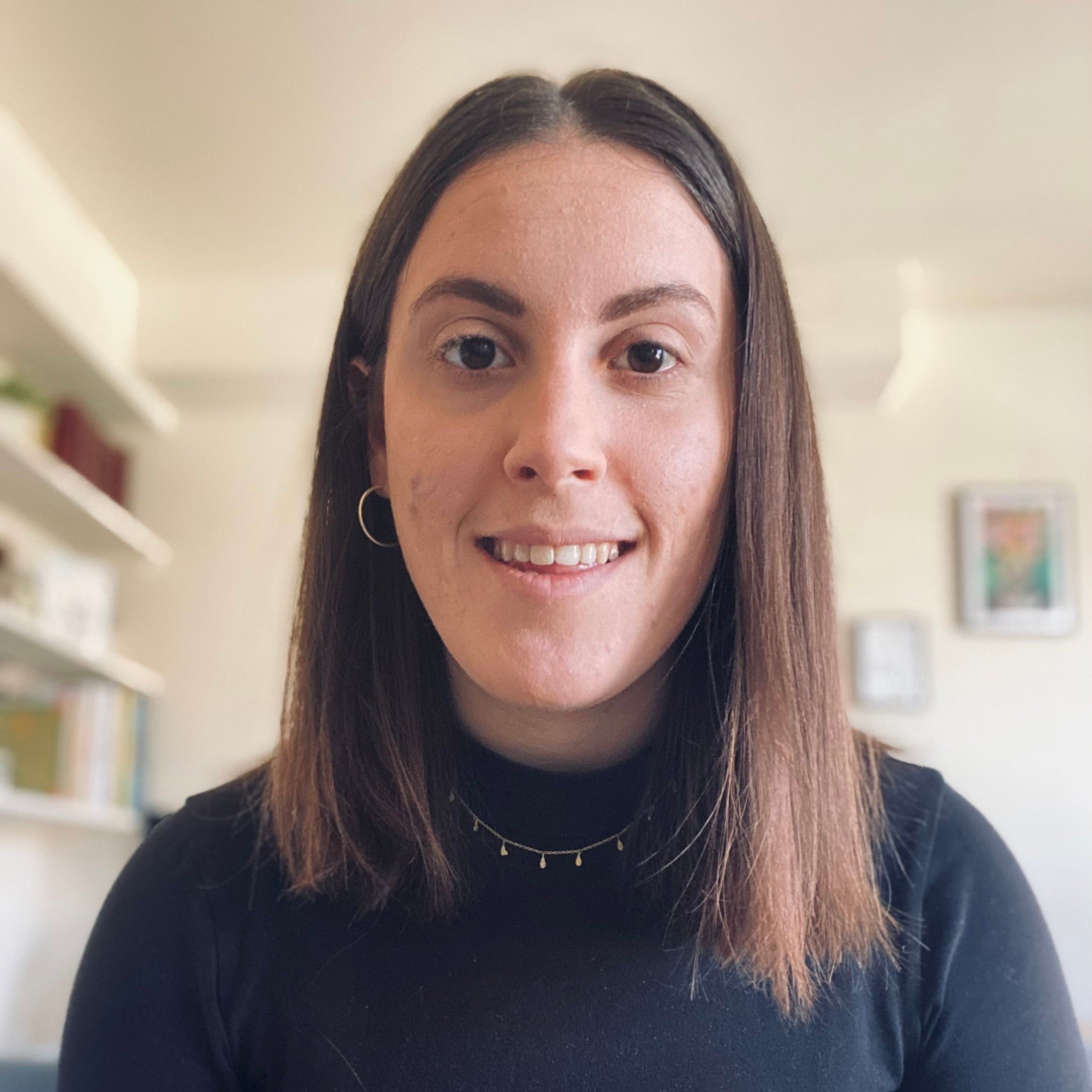 Fundraising is hard at the best of times – throw a pandemic into the mix and you’ll see most founders struggle to stay on track. In a recent survey by PwC, 46% of founders reported delaying fundraising efforts, 48% postponing hiring efforts and more than 50% switching their focus to product development as a result of the pandemic.

Given the latest data on investment figures in the UK (investment reached a record-breaking £5 billion in the first quarter of 2021), it seems that now’s the time to return to fundraising. That’s why Capdesk and PwC Raise | Ventures joined forces last week for a webinar on the fundamentals of successful fundraising.

Moderated by Capdesk Growth Director Kartik Krishnan, the panel covered a range of perspectives from investors and advisers to founders. Antonia Burridge, Director of PwC Raise | Ventures – an arm of PwC that helps high-growth businesses tackle fundraising – and Ed Bardos, COO of Venture Founders – one of the UK's leading investors in fintech and SaaS scale-ups – joined Capdesk Co-Founder and CEO, Christian Gabriel, to offer up insights from personal fundraising experiences. 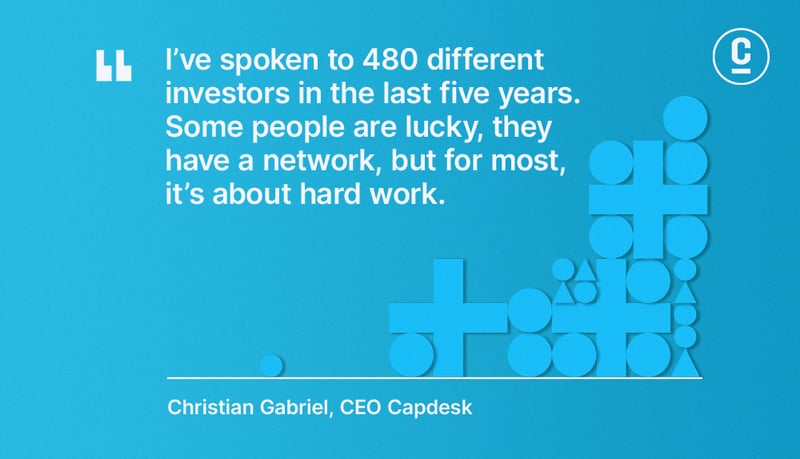 Despite the impact of coronavirus on those seeking capital investment, there are fundamentals to fundraising that remain both series- and pandemic-agnostic.

Christian set the scene, noting that “different people need different types of financing. Once you’ve figured out your KPIs and metrics, then you figure out how much money you need to raise. It’s different at each stage whether you’re raising your series A, B or you’re starting your seed round.”

“If you’re able to raise a £1 million seed round that leaves you with a long runway. But if you’re only able to raise £20k – that was my seed round for Capdesk – then you’ve got less time to prove yourself.”

Pointing out that the strategy behind fundraising is just as important as raising the capital itself, Ed explained that “if you take too little capital, you’re going to be hampered for a long time and continually trying to fundraise. This will leave you undercapitalised. Take too much capital and you risk diluting your position.”

Continuing the discussion of strategy, Antonia stressed the importance of understanding an array of investor types.

“There’s a wide range: venture capital, family offices, strategic investors, angels, VCTs, EIS funds. Each one looks for specific things in terms of traction, sector, geography and return. Once you understand the type of investor you want to engage with, ideally you get a warm introduction because – as research from the British Business Bank has shown – that makes you over twice as likely to receive investment.”

Never underestimate the power of relationships

Imagine a scenario where you’re not pressed for cash and you have the opportunity to engage with investors. Should you start up a dialogue anyway?

Antonia advised against passing up those chances. If you start a relationship with an investor, she said, “at the right time, they’ll be ready to jump in and it’ll be a lot easier for them to sell it internally because they’re already bought in.”

Christian added that success with investors was most often a result of hard work and dedication. Those £20 million series A rounds featured in the media probably have five years of nurtured relationships behind them – something which gets a lot less coverage.

“I’ve spoken to 480 different investors in the last five years,” said Christian. “If you want to succeed, you need to rack up those numbers. Some people are lucky, they have a network, but for most, it’s just about hard work.”

The panel agreed building a network and keeping connections warm is only half a game plan – it’s creating a sense of urgency that edges you closer to completing the round. “The key is to create, drive and sustain momentum,” Antonia advised, revealing her three-step plan to our engaged listeners.

Equipping your fundraising armoury with the right tools

With a foot in the door and warm leads on the table, our panel advised getting your house in order as the next priority. Establishing good habits early will serve you well as you head out of your war room and onto the battlefield of investor meetings.

“Investors ask for relatively standard stuff so you can get organised ahead of time. Have some sort of data room, know where the figures live. Capdesk is a brilliant solution for your cap table and stops uncomfortable conversations later,” reflected Ed.

All speakers agreed that learning how to manage your resources was important in the early days. However, in later rounds, typically series A onwards, each panellist endorsed hiring a fundraising second-in-command to take charge of the numbers:
a CFO. 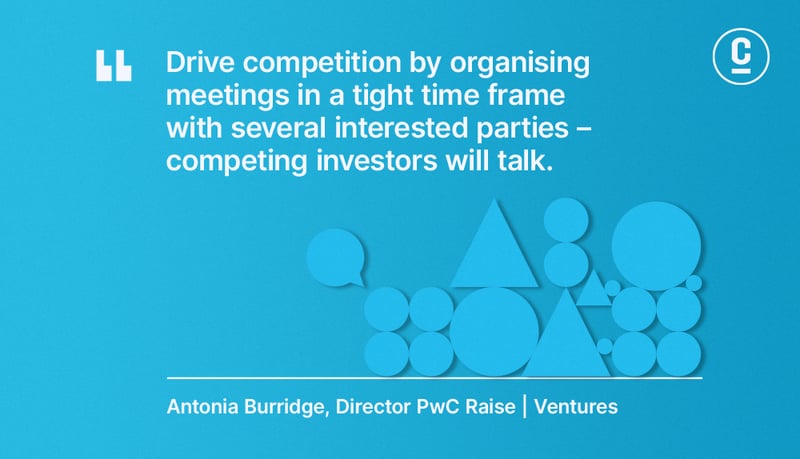 The main reason to instate dedicated financial help is that investors – typically hailing from banks or financial backgrounds – love numbers. While investors want to be sold a story of passion, a well-equipped pitch deck will set you ahead of your rivals.

Antonia ran through the key questions investors usually ask at this stage, describing the '5M' approach that the PwC Raise | Ventures team itself uses to assess businesses:

Eyes on the prize

As the conversation turned from pitch preparation to investor strategy, Christian shared his own experiences raising Capdesk’s series A funding. Closing the round took more than 12 months, and included starting over after losing a term sheet in the early days of the pandemic. Christian leaned on his expansive network, speaking with half a dozen people each day until he’d rebuilt a strong pipeline of potential investors. His outreach strategy centred around personalised communications.

“Always reach out to your target individual, because funds tend to have many different stakeholders. A lot of people say don’t approach the partner right away but I disagree. If the outreach is good enough, you’ll receive a reply even if it’s an intro to someone else.”

“If a meeting is offered, take it – even if that means waiting six months,” he continued. “Once you’ve pitched, however, take your cue from how fast things are moving. If you don’t hear back within a month, consider putting them back to the beginning of your funnel.”

As the discussion moved onto term sheets, Antonia shared valuable research from PwC Raise | Ventures. In a survey of more than 100 term sheets from 2019, 75% featured preferential shares – something that founders are seldom prepared for.

Deals can and will fail at a late stage if terms haven’t been properly understood or negotiated, which Ed argued can be prevented with the help of lawyers.

“Get a lawyer sooner rather than later,” he advised. “The temptation not to is a false economy. There are plenty of good law firms out there that may take equity instead of cash if you’re at an early stage. A lawyer will help balance the equation between founders and investors.”

Most conversations with investors don’t end with a signed term sheet, and in some cases, assessing failures may give you a headstart in future funding rounds, argued Christian.

“When an investor drops off, make a detailed note of why. If an investor tells you to come back when you’ve achieved x, y and z, then you can steer future conversations in that direction to your benefit.”

He went on to explain how investors can be valuable scouts. “While your business might not be right for a certain fund, the investor may know someone who can help.” 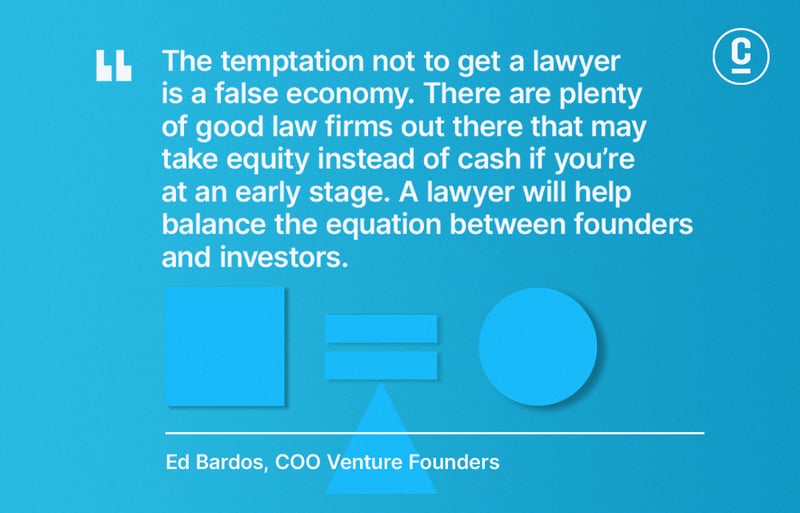 Entrepreneurship is often depicted as a turbulent journey with a passionate protagonist at its heart. Is this true? Christian thinks so.

“You certainly need to be a little bit crazy. Becoming an entrepreneur and pursuing fundraising is a far more intense, far less stable path than joining a business and getting behind its mission.”

“You’ve got to be in this for the long run if you’re looking to get investors on board. If you set your sights on the UK market alone, or a valuation of £100 million, another startup with more ambitious targets will win out. And once you’ve hit that £100 million valuation, investors will want you to keep growing. It’s a lot of pressure.”

Just as important as your own dedication is making sure you're getting in with the right investor. Over the years, Ed’s come to believe that an investor’s passion is arguably more valuable than how much money they have to offer.

“I’ve chased people who seem to have the most money, but if they don’t understand your sector or type of business model, they’re probably not the best investor for you.”

Closing out the discussion, Antonia likened the founder-investor relationship to a marriage and shared some parting advice.

“Go in with your eyes wide open and hopefully it'll be the start of an extraordinary journey.”

The webinar recording is now available – watch it here.

Thanks once again to our panellists Antonia, Ed and Christian, our host Kartik, and to PwC Raise | Ventures for making this event possible.